The Cyprus cat is landrace of domestic cat believed to be descended from cats of Egypt or Palestine brought to Cyprus by St Helen to rid the island of snakes and vermin.

They are not afraid of people however they do not like to be touched though. 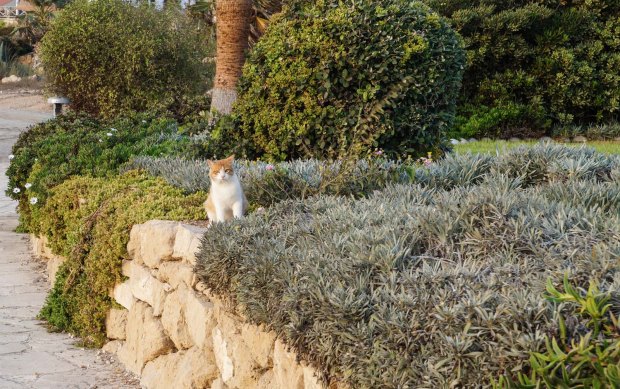 END_OF_DOCUMENT_TOKEN_TO_BE_REPLACED

Legend claims that Aphrodite, Greek goddess of love and beauty, was born from the sea-foam on this pebbly bay, which is dominated by rugged limestone crags rising from the sea. Other myths says these boulders were hurled at the ships of Saracen corsairs by Digenis Akritas, the paladin of the Byzantine frontier.

And rock formations around:

END_OF_DOCUMENT_TOKEN_TO_BE_REPLACED

Kolossi castle was initially constructed in the 13th century and it was then rebuilt in its present form during mid-15th century. This well admired 15th century castle is situated in Kolossi village, 14km west of Limassol in the south of Cyprus.

During the 13th century, the castle served as the Grand Commandery of the Knights Templar and after the fall of Acre in 1291 the castle served as the headquarters of the knights of the Order of St. John of Jerusalem. The castle todays looks very well and well maintained and looks very similar to a tower, similar to ones found across Europe. It was built with military architecture offering security within the area and resisting any attacks. The castle has a height of 21 meters and each of the castle’s four sides are 15 meters long on the outside and 14 meters on the inside.

There is lovely view on the village from the top 🙂

END_OF_DOCUMENT_TOKEN_TO_BE_REPLACED

I really like the event and enjoyed my whole day there. Even my second half who is not interested in horses spent nice time and learnt about history and working horses.

Come explore the world through my lens!

Conquering the world one country at a time.

Dine In, Dine Out...Travel the World.

Spreading the Love of Travel

A life of photographs

My kind of creative

Life through my eyes

From NYC to Europe and to the South, all in the matter of two years, here are all of my stories in between